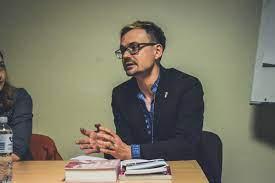 We must reject the freedom destroying another freedom. Simone de Beauvoir

In authoritarian societies, the freedom of speech exists in a very limited and strange format: often, it is spoken about as a straightforward right to vocalise literally everything, incl. the most obscurantist and hating positions presented as liberty, as alternative. In reality, however – Belarus is a good example of that – this “literally everything” includes only what corresponds to the authoritarian state ideology. Scoffing and mocking the political opposition is commendable, but not the government; criticising and badmouthing the west is allowed, but not the local system or the Russian one on which Belarus depends; it is fine to laugh about the heads of any states except the only one President[1].

In the absence of and due to the lack of exposure to the tradition of a respectful democratic dialogue, all, including the government and pro-democracy opposition, swap the notion of real freedom for the notion of freedom of hate. Though they criticise each other now and then, which looks like the embodiment of democratic critique, they are really only playing in democracy. They often speak together with one voice vilifying and marginalising the whole categories of citizens: gays, lesbians and the whole LGBT community; Gypsies, Jews, Muslims, migrants, environmentalists, pacifists, feminists, Blacks, atheists, anarchists, Belarusian-speakers etc. In this unity and likeness of the government and opposition in Belarus we can see the “freedom of hate” so inherent in authoritarianism.

An example of this freedom of hate is a recent proposal of the Roman Catholic Church in Belarus to introduce the law prohibiting the “propaganda” of same-sex relationships and “gender ideology”[2]. The Church, which has somewhat recovered after the era of a state-sanctioned atheism, is still experiencing occasional attacks from the official Russian Orthodox Church. It has quickly forgotten on the mission of looking after the marginalised and disadvantaged, forgotten about its own recent fate of state-sponsored prosecutions. It heartily involved itself into prosecuting gays and lesbians already prosecuted by the authorities. This story shows how easily freedom can be twisted and how challenging is remaining objective and tolerant under authoritarianism; how quickly the freedom of speech and writing is replaced with the populist freedom of hate. This story also illustrates the lack of solidarity between marginalised groups: the less marginalised are afraid of being associated with the more marginalised ones.

Another recent and highly symbolic manifestation of the freedom of hate mistook for the freedom of speech and the essence of democracy by a large proportion of the Belarusian civic society was the interview with USA-based Zianon Pazniak, one of the earliest and best-known leaders of the democratic opposition’s conservative wing. His truly antidemocratic, anti-European and homophobic discourse is natural to his thinking and the value system, which have never been democratic. Zianon Pazniak has been a strong critic of everything Soviet, but not a democrat: the first does not necessarily lead to the second.

Democrats are not simply born despite the surrounding repressive cultures. They become such through hard efforts and work. During those efforts and work, the temptation of jumping off cliff into the freedom of hate is often stronger than the determination of becoming a consistent fighter for the freedom of speech. This right-wing leader’s text is worth of paying attention to also for its display of the undemocratic and helpless nature of the whole Belarusian opposition, because Pazniak speaks for an average opposition follower. Too often, their leaders’ words are a sad confirmation of the fact that the glorified Belarusian tolerance is an empty and baseless stereotype.

As a writer, essayist and sociolinguist, I work with words, texts and languages. I understand how important is preserving the accuracy in public conversations and writings, in selecting the exact words which would not cause harm. I have to acknowledge – with great sadness – that too often the people, whose trade is speaking and writing, cause harm to the already weakened communities. I very much doubt that the freedom of speech undermining the rights of others and making them even more underprivileged has the right to be called freedom. It does not contribute to those communities’ advancement, but kills them.

I am afraid that as long as the freedom of hate is accepted as an adequate substitute for the freedom of speech, the Belarusian opposition will remain only nearly democratic or even authoritarian, while Lukashenka or the dictators following him will continue holding the power.

[1]  In the current standard of the Belarusian language sanctioned by the government, the word president, if related to the head of the Republic of Belarus, must me written with the capital p.