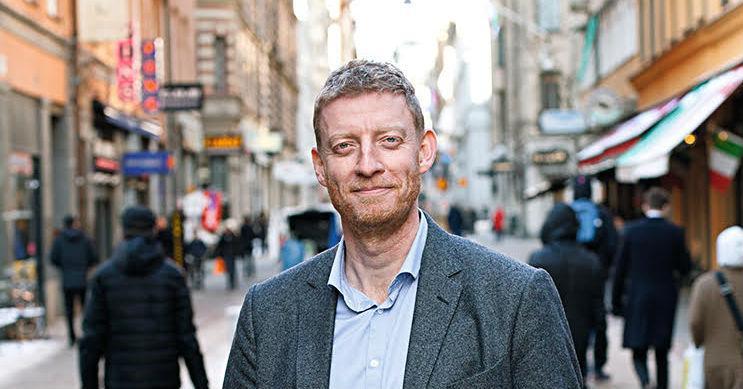 Journalist and writer Jesper Bengtsson was appointed new chairman of Swedish PEN in 2018. As a journalist he followed developments in Burma for more than a decade and has written several books, including on Burma. Jesper has been publishing manager at Atlas publishing company and was previously chairman of Reporters without Borders Sweden. He has also written editorials for the Swedish newspaper "Aftonbladet". He has also been editor in chief of several Swedish magazines.

PEN: You’ve been selected a president of Svenska PEN in 2018, following a long term career in journalism and writing. What has been different ever since? How your daily activity and nature of work has changed?

JB: It has not changed very much, actually. I have always been a bit of an activist in different human rights issues and PEN is not a payed work, only voluntary. I have continued to work as a journalist and writer. But of course, there is daily work with PEN and freedom of speech issues. A need to keep up with everything that´s happening in this field.

PEN: You’ve been a chairman of Reporters Without Borders in Sweden. What is your opinion about the role of journalism in unification of the world? How crucial is this role?

JB: Tricky question. Basically I think the main part of all journalism should be neutral when it comes to that kind of means and don´t think it should strive for either unification or nationalism or anything else. Just facts and information. On the other hand the very fact that journalism exists to describe the world helps people to understand other perspectives and experiences, and that will probably unify us. But that´s my belief. Personally I always try to look for the things that bind us together rather than the opposite.

PEN: How can PEN International and PEN offices in different countries play the similar role for literature and writers worldwide? Do they abolish borders or make stand for the diversity of cultures and voices?

JB: PEN was founded after the First World War in opposition to the nationalistic propaganda used to motivate the war. Writers should meet writers and start a dialogue to prevent the same from happening again. Not with the best result, you must admit, since it only took 20 years to start a new war. But the aim is important, and even more so today. Writers have a certain role. They give people a map for the world. Perspectives, facts and views which helps people navigate, and that´s even more important today when social media has given fuel to fake news and hate speech. I also think PEN has an important role with it´s work for indigenous languages and the right for minorities to communicate in their own language. A language is like a window. You see the reality through it, and the more languages the more windows, to use a slightly pretentious parable.

PEN: You have underlined the importance of the freedom of speech and need for its defense. Is it possible to draw a clear line between the fight for free speech and fight against hate speech?

JB: No, it´s not. And that´s very important. It´s a question of balance between regulation, dialogue and ethics. You should not be allowed to threaten people or for example call for violence against minorities. But above that there should be a high grade of freedom to say pretty much anything. Otherwise it will always be used by governments and authoritarians to oppress freedom of speech. This does not mean it is good or recommendable to use hate in your arguments. But hate speech, if it exists and grows, must – in most cases – be fought with arguments, dialogue and alternatives in the civil society.

PEN: During your journalistic career you have studied and worked on the recent history of Burma. You have published two books on the life and work of the leader of Burma’s democracy movement Aung San Suu Kyi. Why was the story so appealing? What can the developed countries learn from the example of Burma?

JB: Oh, so much. When I first travelled to Burma I realized it is a country with many universal wisdoms to learn. How do we avoid conflict in a multi cultural society? How does a democracy movement survive decades of deep oppression? How do people keep up their good spirit in hard times (and they have most certainly done that)? Why is free information so important? All these questions are important to all of us, and you find part of the answers when you study Burma and it´s history.

PEN: The current pandemic has altered the way world works and raised number of new challenges. How vulnerable are creatives and writers in these circumstances? What difficulties might they face?

JB: First of all it´s a question of money. It´s harder to make a living as a writer in times like this. Then, authoritarian rulers seize the opportunity and use the turmoil to jail writers, change laws and get to dissidents. They do what they probably have wanted to do for a long time.

PEN: What is the main challenge and role of PEN centers around the world in this crisis?

JB: Since nationalism and isolationism seems to be growing the old idea of dialogue and meetings between writers becomes more and more important. This is a very dangerous time for the free speech. PEN and other organizations has to be watchdogs more than ever before.

PEN: Sweden has chosen a different path of handling the epidemic of COVID-19. Unlike other European countries, there have been no strict regulations and lockdowns. Subsequently, the numbers are different. Country officials are saying that they are expecting herd immunity to help eliminate the spread. How does the society react on this politics?

JB: A question not totally related to PEN, haha, but I think most people support this strategy. There are still a portion of freedom to move around and socialize, the economy is not completely closed down. But there are also critiques, of course, who think there should have been a more firm close down. The problem is we all have to live with this virus for a long time, probably more than a year, and we can´t close our societies for that long. My guess is most countries will end up with the Swedish strategy, sooner or later.

PEN: Can you share your opinion about the role of reporting and importance of journalistic ethics in times of pandemic?

JB: Fact checking I crucial, of course. It all starts and ends with that.

PEN: PEN Georgia is the only active center in the region. Shortly, how do you think the organization should work to have an impact on regional level? Are there any examples of such operation we could follow?

JB: Good question, but not one I can answer, unfortunately. Every region is different and PEN has struggled to understand how it can find better regional work. I´m glad to be a part of a discussion about this.